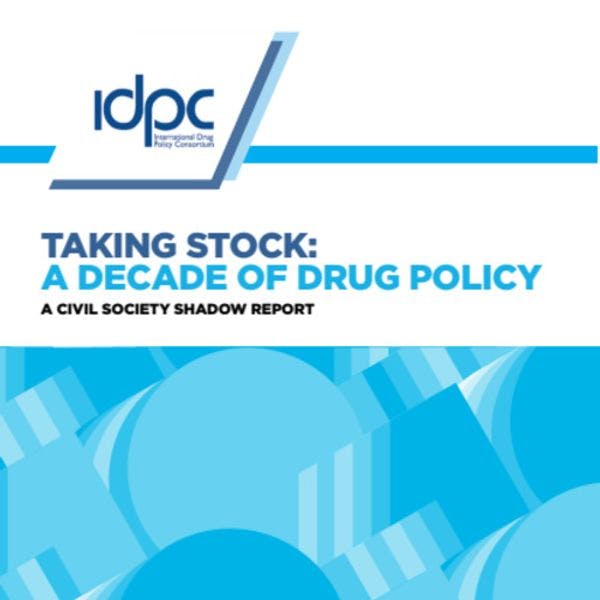 IDPC has also published a civil society shadow report with a regional focus on Asia.
10 years of drug policy in Asia: How far have we come? is available here.

Objective of the Shadow Report

‘Taking stock: A decade of drug policy’ evaluates the impacts of drug policies implemented across the world over the past decade, using data from the United Nations (UN), complemented with peer-reviewed academic research and grey literature reports from civil society. The important role of civil society in the design, implementation, monitoring and evaluation of global drug policies is recognised in the 2009 Political Declaration and Plan of Action on drugs, as well as in the Outcome Document of the 2016 United Nations General Assembly Special Session (UNGASS) on drugs. It is in this spirit that the International Drug Policy Consortium (IDPC) has produced this Shadow Report, to contribute constructively to high-level discussions on the next decade in global drug policy.

The commitments and targets set in the 2009 Political Declaration and Plan of Action have not been achieved, and in many cases have resulted in counterproductive policies. The Shadow Report also raises a number of issues on the past and future evaluation of global drug policies. Firstly, the Report highlights the urgent need to conduct more thorough and regular research on the broader range of impacts of drug policies at local, national, regional and international level.

Secondly, and related to the need for more research, the Report puts into question the sources of data currently being be used for such formal evaluations. These rely heavily on government reporting. A more comprehensive and balanced picture of the situation requires incorporating civil society and academic research. This is particularly important for sensitive issues related to drug policy and human rights.

And thirdly, the lack of progress made towards the drug-free targets, along with the negative consequences associated with efforts to achieve those targets, mean that member states should reflect upon what to measure. Focusing exclusively on measuring the scale of the illegal drug market is clearly not enough to understand the impact of drug policy on the key UN Charter commitments to health, human rights, development, peace and security. The third section of this Shadow Report attempts to provide some recommendations which we hope will provide a useful starting point for further discussions as to which goals and metrics could be considered for the post-2019 global drug strategy.

Recommendations
In preparation for the 2019 Ministerial Segment, the IDPC network recommends that:

The shadow report initially stated that, according to the UN Commission on Crime Prevention and Criminal Justice (CCPJ), 83% of all people convicted for a drug offence had been sentenced for drug possession. In May 2020, this was amended to reflect the accurate interpretation of the CCPJ’s findings, which is that 83% of all recorded drug offences are offences related to possession, with no reference to sentencing. According to more recent UN data from 2019, one in five people incarcerated worldwide are detained for a drug offence, of which 21.65% (or 470,000 people) were detained for drug use and drug possession only.

Please note that this is an updated version of the report, dated 30th November 2018.