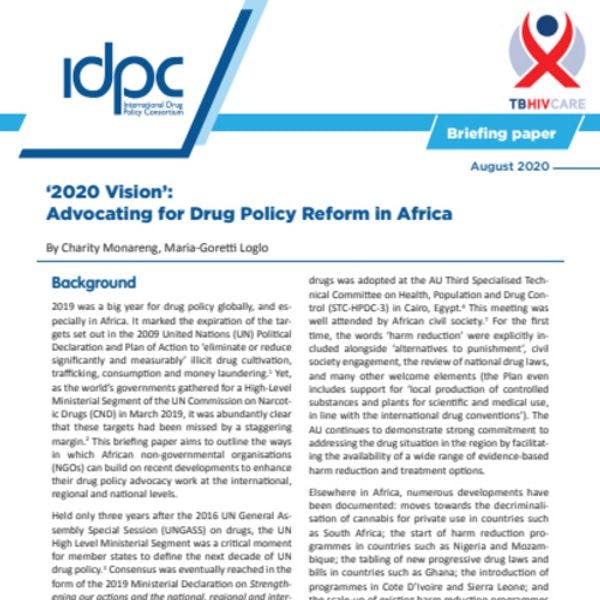 2019 was a big year for drug policy globally, and especially in Africa. It marked the expiration of the targets set out in the 2009 United Nations (UN) Political Declaration and Plan of Action to ‘eliminate or reduce significantly and measurably’ illicit drug cultivation, trafficking, consumption and money laundering. Yet, as the world’s governments gathered for a High-Level Ministerial Segment of the UN Commission on Narcotic Drugs (CND) in March 2019, it was abundantly clear that these targets had been missed by a staggering margin. This briefing paper aims to outline the ways in which African non-governmental organisations (NGOs) can build on recent developments to enhance their drug policy advocacy work at the international, regional and national levels.

Held only three years after the 2016 UN General Assembly Special Session (UNGASS) on drugs, the UN High Level Ministerial Segment was a critical moment for member states to define the next decade of UN drug policy. Consensus was eventually reached in the form of the 2019 Ministerial Declaration on Strengthening our actions and the national, regional and international levels to accelerate the implementation of our joint commitments to address and counter the world drug problem. A new 10-year timeline running until 2029 was also agreed, with a midterm review scheduled for 2024. At the same time, the Chief Executives of all 31 UN agencies have signed on to a progressive Common position supporting the implementation of the international drug control policy through effective inter-agency collaboration’ – which provides strong commitment to balanced drug policies based on health, human rights and sustainable development.

The last few years have been significant for African drug policies as well. In 2019, a new African Union (AU) Plan of Action and Implementation Matrix on drugs was adopted at the AU Third Specialised Technical Committee on Health, Population and Drug Control (STC-HPDC-3) in Cairo, Egypt. This meeting was well attended by African civil society. For the first time, the words ‘harm reduction’ were explicitly included alongside ‘alternatives to punishment’, civil society engagement, the review of national drug laws, and many other welcome elements (the Plan even includes support for ‘local production of controlled substances and plants for scientific and medical use, in line with the international drug conventions’). The AU continues to demonstrate strong commitment to addressing the drug situation in the region by facilitating the availability of a wide range of evidence-based harm reduction and treatment options.

Building on developments at the international and regional level, 2019 also resulted in the development of the African Civil Society Common Position on Drugs. The Common Position seeks to incorporate the perspectives and guide the work of a wide range of NGOs from across the African continent, and to support, shape and guide civil society and governmental responses over the coming years.

This briefing paper is aimed at civil society organisations and allies across Africa, and serves as a guide on international advocacy, regional advocacy and how to utilise these to advance national advocacy. The paper also proposes advocacy priorities and approaches for 2020 and beyond – divided into three sections for international, regional and national-level work. It is designed to complement the more detailed global advocacy note published by IDPC after the UN High Level Ministerial Segment itself.